While serving the tax, financial planning and accounting needs of individual, professional, not-for-profit entities, and corporate clientele, Mr. Paul focused on small business accounting, planning, and auditing. The majority of his 50-year career, he has studied and focused on tax litigation and IRS negotiations. Because of his expertise, he has assisted taxpayers in more than twenty states. Wayne has also served as an expert witness in the courts, including a very significant Federal case in Nevada dealing with the use of gold and silver coin contracts as a medium of exchange.

Wayne has served as an officer in a number of civic organizations, political campaigns, and as an active member of his church. He taught small business accounting at Brazosport College for ten years, and taught home-study courses on The U.S. Constitution and its Biblical principles.

From 1994 to 1999 served as the Chief Financial Advisor of AVA Services, Inc. a multi-million dollar company whose business area encompasses the south-eastern region of Texas. Responsibilities were to assist in the analysis of financial data needed to make crucial business decisions. Provided insight and counsel as to the future goals and direction of the company. Handled all the critical financial matters of the company including debt restructuring and TAC compliance issues, as well as the refinement and development of all policies and procedures of the company.

From 1988 to 1994 worked as professional associate of Wayne A. Paul, CPA’s preparing and compiling, reviewing, and auditing financial statements. Gained experience in tax compliance areas for individuals, as well as all forms of business entity. Gained the ability to communicate complex business issues by interacting with clients from all walks of life.

Fluent in English and Spanish

James has served on the board of a number of civic organizations like the Executive Board of the Bay Area Council of the Boy Scouts of America. He is very dedicated to his family and church and is often called upon to teach and counsel others.

Jodie began her career in a local firm whose primary clientele were government and non-profits. For many years she has focused on small to mid-sized business with audit and corporate taxation. She is experienced in business controllership, audit, other attestation engagements, as well as mergers and acquisitions. 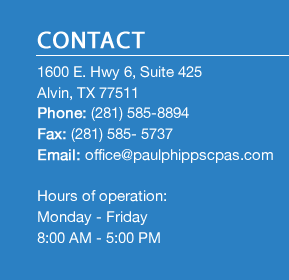